The Middle East book is starting to get into the realm of real dates for events, and so I’m including some reference points for what else is happening in the world c.2900BCE to c.2200BCE. For this chapter my only points of comparison are in Egypt – the earliest potentially datable Chinese dynasty were the Xia in 2100BCE so a little later on.

The Emergence of City States

Despite the title of this section of the chapter it is not so much about the birth of city states as a concept (that was the last bit of the chapter) but more about the growth of these and the first couple of unified empires in Mesopotamia. At first the early city states were independent of each other, and were frequently in conflict over the limited agricultural resources of the region. This Early Dynastic Period (2900-2300 BCE) is characterised by rivalries between the city states. The first to establish itself as a major centre for the surrounding region was Uruk, with Lagash and Umma developing into such after 2500 BCE. Some cities became more symbolically important – like Nippur (which was where the shrine of Enlil (a major deity) was), or Kish. In both cases being able to say you were king of the city implied that you were endorsed by their gods and so “should” have sovereignty over other cities. The first ruler over a unified Sumeria came from Umma and reigned from 2375 BCE to 2350 BCE, but Lugalzagesi’s empire didn’t outlive him. The first lasting empire was that of Sargon, ruler of Akkad, who proclaimed himself King of Sumer and Akkad (a title that was used for the next 200 years).

The Royal Standard of Ur (see pic below) dates from this era (c. 2600-2400 BCE) and there’s a small sidebar in the book about warfare in Sumeria illustrated by the decoration on this object. Most of the soldiers would’ve been foot soldiers – but they did also have chariots of a sort. They were drawn by onagers (wild asses) and were heavier than later chariots, so probably actually used as mobile observation platforms than as battle weapons. At first the military leadership was separate from the city rulership, but as warfare became more important the two roles merged. 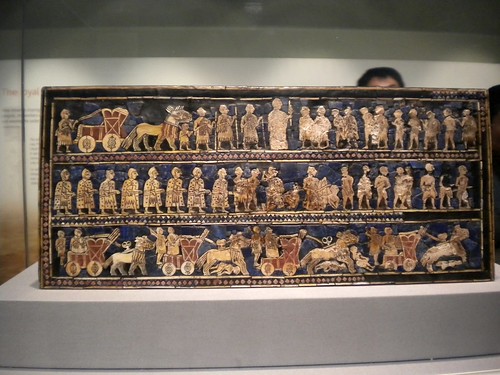 Again the book is a trifle confused in its organisation as the next double page spread about the city of Uruk reiterates much of the info that the previous section of this chapter gave us (but with new pictures). The key point for this era is that Uruk’s political importance decreased in the Mesopotamian Early Dynastic Period. However, the increasing importance of the legends of Uruk’s foundation by Gilgamesh indicate that the city continued to have religious significance.

The city state of Lagash rose to prominence during this era. The state of Lagash had three centres: the economic one was the city of Lagash itself, Girsu was the religious and political centre and there was a further temple precinct at Nina. The people of Lagash seem to’ve been particularly keen on war, as evidenced by their local patron gods. One was their version of the war god Ninurta, called Ningirsu – who was also patron of irrigation (a key area of conflict with the nearby city state of Umma). And the other patron god was the war and fertility goddess Nina, who was related to Inanna/Ishtar. As well a belligerence against their neighbours this is also the first place where a revolt against the city rulers is recorded, and the king instated after the revolt is thought to’ve created the first law code in Mesopotamia. Sadly no dates given for this king, Urukagina, but as it’s mentioned he’s several hundred years pre-Sargon of Akkad he must’ve reigned long before 2350 BCE. Perhaps contemporary with the 4th Dynasty Pharaoh Khufu or maybe even earlier than that.

As well as the Sumerians and the Akkadians there were other cultures in and around Mesopotamia during this period. The Amorites were one of these – the name we use for them derives from the Sumerian word for westerner (amurru), and they initially lived between the Sumerians and the Cananites & Egyptians. The Sumerians regarded the Amorites as barbarians, but evidence from their cities (such as Mari or Ebla) suggests otherwise. These cities had extensive libraries and there is evidence they were hubs on the trade networks running between Mesopotamia and Old Kingdom Egypt. The Amorites may also have founded Bablyon (although Sargon of Akkad is later credited with this) – this would be after the Akkadian Empire collapsed when the Amorites were filling the local power vacuum. There were also Hatti in central Anatolia (who were not the cultural ancestors of the Hittites despite the face we use the same name for the two cultures), and the Elamites who lived to the east of Sumer.

The Akkadians lived to the north of the Sumerians, and even before the Akkadians ruled Sumer there was a lot of cultural contact. The Akkadian language is a Semitic language, so from a completely different family to the Sumerian language, but there is evidence of word borrowing between them. In particular the Akkadians picked up words for writing and gardening from the Sumerians, whereas the Sumerians picked up words for war, herding and religion from their neighbours. The most obvious cultural exchange between the two peoples was that the Akkadians learnt and used the Sumerian writing system (cuneiform). This was to continue long after the Akkadian Empire collapsed – Akkadian written in cuneiform was to be the diplomatic language for the next couple of millennia in the region. It’s been suggested that in the reverse direction the Sumerians acquired elements of Akkadian theology. They began to worship some of the same gods (notably Shamash and Ishtar). The conceptualisation of the gods as capricious or malicious may also have been Akkadian in origin. As an aside the book notes that while in the Old Testament flood story God floods the world because of mankind’s wickedness, in the Sumerian version of the myth the gods do it because humanity is too noisy!

Sargon of Akkad established the world’s first empire c.2350 BCE, and unsurprisingly we don’t have much concrete information about his rise to power. Legends about him are reminiscent of later biblical stories (for instance like the stories of King David). His conquests started with Kish (in the north of Sumeria) and then Umma, which was one of the largest Sumerian city states at the time. Despite the need to constantly put down rebellions in previously conquered city states Sargon extended his empire to the Levant and to the Taurus mountains in Turkey. The rebellions eventually lead him to change the government in the city states he conquered – he installed his sons as the new governors and his daughters as high priestesses. There is little written about Sargon in contemporary sources – he only appears in the records of Susa (the Elamite capital city). Most of our information comes from later legends and King Lists. These say that he reigned for 56 years, and it was a turbulent period as he was unable to stabilise his control of his empire and was constantly fire-fighting against rebellions. The next four rulers of the empire reigned for 86 years between them. These kings included Sargon’s son (with a reign of only 9 years) and his grandson Naram-Sin who reigned for 30 years. The office of chief priestess of Sin (the Akkadian’s primary god) also became hereditary and was always a daughter of the king.

The empire was never particularly stable – all the kings had to frequently wage war to enforce taxation and tribute requirements from the regions outside their core area of Babylonia, and to protect necessary trade routes. However one area of success was in the organisation of agricultural production. Competition for agricultural resources had been one of the major sources of rivalry between independent city states, and so the Akkadian empire centralised (and protected) the storage of grain and distributed it as rations throughout their empire. This meant that there were no famines for over a hundred years despite decreasing rainfall and flooding in the highlands – the continued rainfall in the lowlands enabled sufficient grain production to keep the empire fed.

After 150 years the Akkadian Empire abruptly collapsed for reasons that are unclear. Previous hypotheses have focussed on the internal turbulence of the empire – suggesting potential problems such as the cost of all the military campaigns that were necessary. The book dismisses these theories as “logical but unconvincing”, in large part because these problems were the same throughout the whole of the empire’s history. A more recent hypothesis is to do with climate change (which is, of course, the trendy theory for collapses of civilisation these days …). There is evidence from sediment cores that suggests that around the time of the Akkadian Empire’s collapse there was a sudden shift towards more arid conditions. This same shift is seen across a wider region than just Mesopotamia – it’s a current hypothesis to explain the collapse of the Old Kingdom in Egypt as well. Backing this up is archaeological evidence from Tell Leilan in northern Mesopotamia, where the remains of domesticated sheep & cattle from this period show signs of extreme water deprivation. Textually the climate change hypothesis is backed up by ancient sources that blame the fall of the Empire on the displeasure of the gods with Naram-Sin who attacked the city of Nippur and sacked the temple of Enlil. And so the gods cursed Akkad and “… the great agricultural tracts produced no grain. The irrigated orchards produced neither syrup nor wine. The gathered clouds did not rain… People were flailing at themselves from hunger.”.

After the collapse of the Akkadian Empire the next power to rise up in the region was a Sumerian dynasty – the Third Dynasty of Ur – which formed the only Sumerian Empire. And that’s what the next section of the chapter is about.