It’s always a little odd going back somewhere you used to go a lot after a gap of several years – and going to UEA (where I used to work) for a gig on 4 June was no exception. It was kinda the same, but not. And gave us a feeling old sensation as we realised how young the students looked 😉 The gig was in the LCR which is quite a nice space for a concert because about halfway back from the stage the floor goes up a bit (with steps) so there’s not so much of a rush to the front – the audience starts equally divided between people near the stage (like us) and people on the steps. However they could do with cleaning the floor a bit more as it was unpleasantly sticky even at the beginning of the gig :/ The audience was really studenty as you’d expect, tho we weren’t the oldest in the crowd. And mostly nice or at least inoffensive, except the troglodyte near us who managed to have about half the audience turn and tell him to shut up & stop being a dick just after the concert started (he did shut up, after a poor attempt to look unconcerned by general opinion). 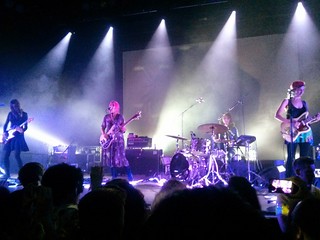 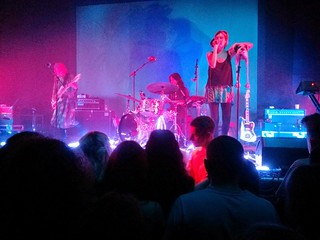 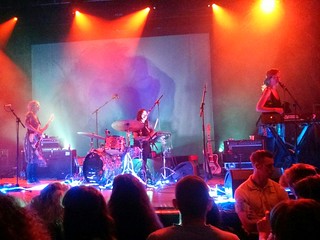 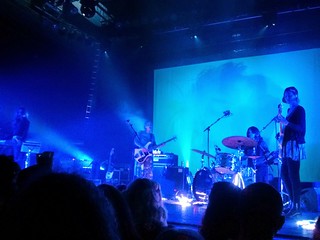 Warpaint are an all woman four piece band who J has got into recently (one of his favourite bands of the last year or two). I’ve not listened to them much, but what I’ve heard I like – they’re sort of poppy/rocky sort of stuff. (And I’m bad at describing music, as always.) In a way the stage layout/mix of musicians made me think a bit of The Beatles – two at the front, both of whom sang lead and/or played guitar, a bass player and a drummer (both of whom sang backing vocals). This was really a warm-up gig for a festival they were playing at the weekend, so it was just them and no support. I really enjoyed their set 🙂 The video below is from someone who was pretty much just in front of us in the audience: