At the end of 2015 the British Museum put on an exhibition about the Celts, looking at both the original culture in its historical context and the way it was later re-imagined. The overall take home message from the exhibition was that the ancient people we now call Celts probably didn’t think of themselves as such, and the modern peoples who we call Celts don’t necessarily have that much to do with the ancient Celts. The Greeks were the first to refer to “the Celts”, and the Romans later took up the term. They used it for the barbarians to the North and East of Greece & Rome – in modern day Spain, France, Eastern Europe and Turkey; not Britain (at least not intially). It’s not known if the Celts saw themselves as single culture, nor if they used the term Celts to describe themselves, but it seems unlikely.

To set the tone the exhibition opened with three iconic (modern) Celtic symbols: an Irish harp, the Druid’s flag and a Pictish stone. And then around the corner were some examples of ancient Celtic art, and video showing the changes in what Celt has meant through the ages – covering along the way the noble barbarians of Roman writings, the Christian monks of Ireland, the national folk heroes of the 19th Century. After this the exhibition fell into two parts: first the historical Celts and then the later re-imagining of Celtic identity.

The ancient Celtic artifacts were laid out in several cases in one long sweeping room, with curved trails on the ceiling which you could use as a guide for how to travel between the cases. I hope they did that on purpose (I’m sure they did), because it seemed awfully thematically appropriate. The central theme of this whole room was that the ancient Celts were many different peoples & tribes, but they were linked by shared culture, art style and languages. So it seemed appropriate to be moving between the disparate cases following a line drawn from their art style. An important difference between Celtic art and the contemporary Greek art was that the Celts weren’t interested in naturalistic representations. Of course the abstract swirls and so on aren’t naturalistic, but even their portrayals of animals (as in the jug I have a picture of below) are stylised rather than realistic. (That jug is one of the Basse-Yutz Flagons, found in France dating to 400-360BCE – I took this picture a couple of years ago, one of the pair is on display in the Iron Age Europe room in the British Museum, and it’s one of my favourite items to go & see.) 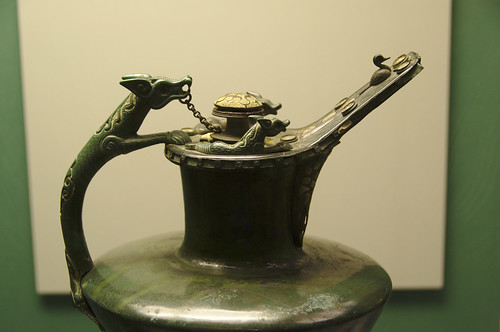 The items in this room were grouped thematically rather than by culture, to emphasise the commonalities. Near the beginning of the space was a reminder that they shared so much because the world was a connected world then as it is now – trade links people – and one of the cases that was particularly striking was a selection of torcs from right across the Celtic region. They were all recognisably the same thing, but different areas had different styles. Some were big and powerful looking, some were beautiful and delicately made. I particularly liked a big silver one from southwest Germany which had bulls heads as the terminals. And then as counterpoint to that case there was a hoard of torcs that was discovered in Scotland – there are several different styles of torc in this hoard, but all were made locally and inspired by exotic foreign designs.

As well as traders the Celts were also warriors. One of the items in the exhibition for this theme was a carynx – a boar headed warhorn. They had both an original and a replica, and a recording of a replica being played, which was rather cool. They also had a replica chariot, based on fittings found in a grave in Wetwang, Yorkshire dating to c.200 BCE, which I was a bit surprised to see had some basic sort of suspension rather than being completely solid.

The Celts also went in for feasting in a big way – the Greek writers thought the Celts were very fond of their wine. And to serve their feasts they had ornate vessels, some of which have also been discovered in graves for feasting in the afterlife. The pièce de résistance here was the Grundestrup Cauldron, which I would’ve loved to’ve taken photos of but had to settle for a postcard instead – which shows the same bit of decoration as the photo below (which I found on wikipedia with a licence that meant I could use it). It’s not actually my favourite bit of the decoration – that was the bit with the warriors playing carynxs. 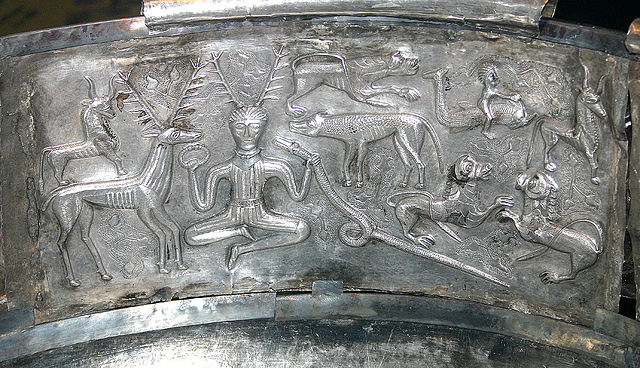 The next section of the exhibition looked at the impact of Roman conquest on Celtic art, and identity. In continental Europe the Celtic style pretty much vanished in favour of Roman art. The situation in Britain was more complex – Britain was conquered relatively late, and never completely, so it was more of a frontier and never fully assimilated culturally into the Empire. There was definitely some Roman art in Britain of course – for instance they had on display a statue of Nero found in East Anglia around the time of Boudicea. And there was also some amalgamation of gods (and associated iconography). But Celtic art styles and culture also became a badge of “not Roman”, particularly around the periphery of the Empire on both sides of the border. Torcs, for instance, became more elaborate and are used as a statement of cultural identity (as opposed to just of status within the culture).

The exhibition then moved on to a time after the Romans left and after the Anglo-Saxons arrived. In this period the Celts were once again the periphery of the main culture of the British Isles – the “not Anglo-Saxon” peoples living at the western & northern edges. These post-Roman Celts were Christians, and their Christianity had an art & devotional style that was distinctively Celtic. The items that caught my eye in this section were a large (replica) stone cross from Iona, and at the other end of the scale the St Chad Gospels. For all their Christianity they still kept telling some of their original mythological stories – we know this because they were written down later in the medieval period in manuscripts like the Book of the White Earl.

The last couple of sections of the exhibition left behind the historical Celts and moved on to the later rediscovery & re-imagining of Celtic identity. There’s no evidence that the historical Celts ever thought of themselves as Celtic, and once the Romans had left Britain no-one else called them Celts either. This changed with the Renaissance, when scholars returned the old Greek/Roman term to use, but redefined it as specifically the people of the north-west of the British Isles rather than a Europe-wide culture. Books from the 17th Century tended to depict the ancient Celts in a very similar way to the way contemporary artists depicted Native Americans, and this theme continued through to some Victorian art as well. Even down to skin tone in some cases, as if the peoples met on the other side of the world had to be physically similar to ancient peoples because all were considered “noble savages”! The mind boggles.

From the 1750’s onwards the Celts and their mythology & history were retold in romanticised tales. For instance in 1760 there was a book publised by James Macpherson which purported to be a translation of work by the Celtic bard Ossiam. It was enormously popular, inspiring paintings and sculpture, and admired across Europe by people such as Goethe & Napoleon. Even after it was revealed to be the fabrication of Macpherson and not remotely ancient nor Celtic it still retained a lot of influence. The later 19th Century Celtic Revival was based a little bit more in fact – archaeological discoveries like the Tara brooch inspired jewellery designs and pattern books. Rennie Mackintosh’s work is a part of this movement and the part that I like. The part that I’m rather less fond of is what I’d characterise as Victorian twee-ness, and they had several examples of such things. There’d been a Victorian statue of Caractacus earlier in the exhibition that fell into this category, and also a few rather twee paintings of Celtic myths (like John Duncan’s The Riders of the Sidhe). And they also had the regalia of the National Eistedfodd in the exhibition, all my notes say is “Victorian invention, twee beyond belief!”.

The exhibition finished with a look at Celtic identity today. Again, it’s political and political in a “we’re not that lot” sense just as it was back in Anglo-Saxon times or Roman times. Nowadays of course it’s English that a Celt is not. As the English born & brought up child of Scottish parents I personally don’t see myself as either English or Scottish, preferring to call myself British. But the parts of the Celtic diaspora that headed to the US in particular have a different way to look at it. The exhibition noted that there are more people who identify as Irish in the US than there are in Ireland! And in Ireland itself Celtic identity is a powerful political statement – the mythological Irish hero Cúchulainn is now a big part of Irish Nationalist identity.

I really liked this exhibition (I even went to see it twice!), although I preferred the earlier sections about the historical Celts to the later parts about the re-imagined Celtic identity 🙂