For the second part of his Bloomsbury Summer School study day on cuneiform Irving Finkel talked about the Cyrus cylinder which was found in Iraq during excavation at Babylon in 1872. It is a cylinder of baked clay which is covered in cuneiform writing, and you can see it at the British Museum. The largest part actually belongs to the BM, and there’s another fragment that they have on permanent loan from Yale. (My photo below is actually of a replica, I think the real thing was on loan somewhere at the time I took the photo a couple of years ago.) 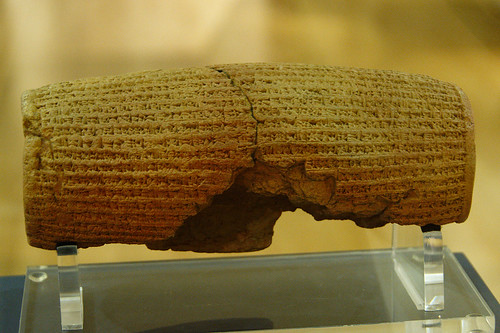 It was written at the behest of King Cyrus in 539BC, shortly after he invaded Babylon. This was apparently a bloodless conquest and it was the end of native rule in Babylon: the previous king was the last Neo-Babylonian king. The text starts with a description of the chaos in Babylon before Cyrus came along (which made me think of the Egyptian 1st Intermediate Period texts where a nomarch’s tomb will announce how he brought order out of the chaos that Egypt was in). It continues by saying that the chaos was so bad that the gods had left their temples, and the god Marduk went in search of a candidate to rule Babylon instead of the current king. He found his ideal man in Cyrus – not a Babylonian but from Iran (Persia).

The text implies that Cyrus was a Marduk worshipper, but this is probably propaganda – especially as the Babylonian King whom he overthrew (Nabonidus) particularly worshipped a different one of their pantheon (which didn’t go down well with all of his people). Finkel pointed out that one would never read a modern text (newspaper article, press release, whatever) credulously so why do so for an ancient text? Propaganda and spin is nothing new. A more cynical reading of the text is that Cyrus took advantage of a schism in Babylonian society and picked a religious side that was opposite to the King whilst still popular with the public – and so rode that wave to a “welcomed” conquest.

In another act of propaganda Cyrus had Nabonidus’s name removed from any places where it was. There are a couple of pieces of evidence for this – the first is a tablet that has written on it a satirical poem about Cyrus doing so. And it’s backed up by a large stone stela which has on its front a relief of a king with a big blank space next to it where one would expect an inscription. If you look at the sides of this stela there are inscriptions naming Nabonidus. Finkel suggests that this stela perhaps once stood in an alcove & so when the men came to chisel off the inscriptions they only saw the front one and the sides got overlooked.

When it was discovered the Cyrus cylinder was a particularly big deal to Victorian London society because Cyrus is also mentioned in the Bible. He is the King who let the Jews return to Israel after the long exile in Babylon. However this interest resulted in the cylinder being built up into even more that it actually is. One myth is that it’s the actual decree permitting the Jews to go home – which is rubbish, it never mentions the Jews. Another (slightly more recent) myth is that it was the first charter of human rights … which is also rubbish. It does say that Cyrus will rule as a just king etc etc, but that’s a pretty standard thing for rulers of that time and place to say particularly after they’ve conquered somewhere. “Your old king was crap in all those ways; I will be awesome in all these ways”. But Finkel did say that even though the text itself has no relation to our concept of human rights the cylinder has taken on a sort of second life in modern Iran where it is a symbol of pride in their ancient civilisation and of human rights.

Another thing often said about the Cyrus cylinder is that it’s unique – this is also rubbish. This seemed implausible to experts from the start (it’s the sort of text you expect to be churned out by a conquering king) and there has been recent proof that it is indeed not one of a kind. Both Finkel and a colleague have discovered fragments of the Cyrus cylinder text in the British Museum’s collection of tablet fragments. These two fragments overlap with the text, but also with the missing portions of the cylinder. And they are from flat tablets rather than cylinders. So they are definitely from one or more separate copies of this text. Interestingly the fragments are also better quality than the cylinder, which is both of poor clay and lower quality writing. Finkel said this was probably because the Cyrus cylinder was intended to be buried – so people wouldn’t see it particularly often. He thinks there were probably thousands of copies of the text buried and distributed amongst the land that Cyrus ruled over (and beyond).

One of the (several) tangents that Finkel went on during this talk was about some fossilised horse shanks from China which were discovered with cuneiform on them that turned out to be the Cyrus cylinder text. The text had many omissions and was overall poorly copied, leading to thoughts that they were a fake. But equally the signs used for the text weren’t the same as those the cylinder – they were a different style and from a different period. So legitimate signs, and clearly not (poorly) copied straight off the Cyrus cylinder, which might incline one to think they were real. Finkel said he nearly published something saying they were real for these reasons, but shortly before the book was sent to the publisher he discovered where they’d been copied from! Wallis Budge (he of several Egyptology books of slight dubiousness by modern scholarship standards) had published an article about the Cyrus cylinder text. In it he’d presented the cuneiform using these different forms of the signs, and had presented the exact bits of text the horse shanks had (pooly) copied. So that was the origin of these fakes!

The two take home messages from this particular talk were first that one shouldn’t take anything at face value. And that there are no unique things in history, if we think there’s only one that just means we haven’t found another. And Finkel finished up with an anecdote of a surprising example of this – the Ishtar Gate from Babylon seems a prime candidate for uniqueness. However! A life size replica has been discovered in Persepolis built during Cyrus’s reign, outside his palace. Clearly he was pretty impressed by it when he conquered Babylon.