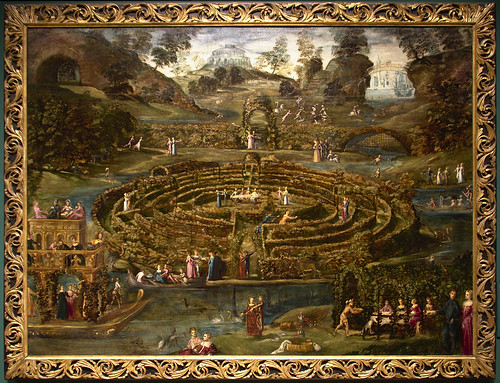 Last summer I went to an exhibition about paintings of gardens – Painting Paradise: The Art of the Garden – in the Queen’s Gallery, Buckingham Palace. Mostly I went because I had free entry to it (having been to the From Cairo to Constantinople exhibition earlier in the year (post)), and I was in London for a few days. I’m not entirely sure what I was expecting, but there were some interesting paintings to see. I think they way they do these exhibition is to pick a theme, see what the Queen owns that fits, and then put together some sort of coherent narrative for the exhibition. So this was all about gardens, and there was art ranging from Persian garden scenes through to paintings of Royal Garden Parties of the Victorian era. The narrative thread holding it together was the changing way that gardens are perceived over time. In general I liked the first couple of rooms of the exhibition, and found it got duller & twee-er as we got towards the later Hanoverans and Victoria. This quite possibly just reflects my biases about what history I find most interesting, rather than the exhibition 😉

It started with a couple of Persian garden scenes to set the scene and to explain the title of the exhibition. The word “paradise” comes in to English from Persian via Greek. The Greek word paradeisos (παράδεισος) is of Persian origin, based on two words meaning “to form” and “around”. The key features of a Persian garden are that it had walls around it, and a water feature. So a somewhat different conception of garden than the modern one, which has much more of an emphasis on plants. 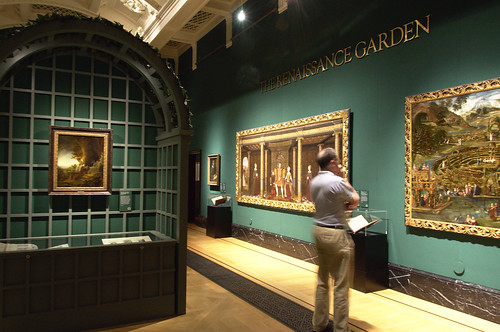 The main part of the first room concentrated on the Renaissance Garden – much to my tastes, particularly as one side of the room was dominated by a large painting of Henry VIII and family (with the gardens of Whitehall visible behind them; sadly I couldn’t get a decent straight on photo of it). The themes explored were: the garden as an expression of princely power (as in said painting); the garden as a religious symbol; the garden as a place to grow exotic and/or useful plants. Obviously the religious symbolism of the garden ties in to the title of the exhibition – the garden of Eden as an earthly paradise. But gardens also show up in the art of the time in reference to the image of Christ as a gardener (both symbolically and to illustrate Mary Magdalene mistaking the risen Christ for a gardener when she came his tomb). And the Virgin Mary is often painted in a garden. As well as important symbolism tapestries depicting gardens were used to bring colour & life to interiors particularly in the winter. 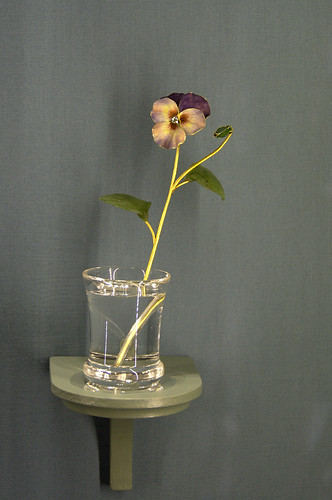 The next room looked at the Baroque garden – in particular the formal gardens of the Stuarts and the early Hanoverans. Gardens in this period were still primarily expressions of princely power and status – “look how well I bend the world to my whim”. There was a particularly striking picture of Hampton Court Gardens during the time of William III: a birds eye view of how well nature had been tamed and formally organised. I also liked the tulip vases – pagoda-like structures with each flower in a separate hole. 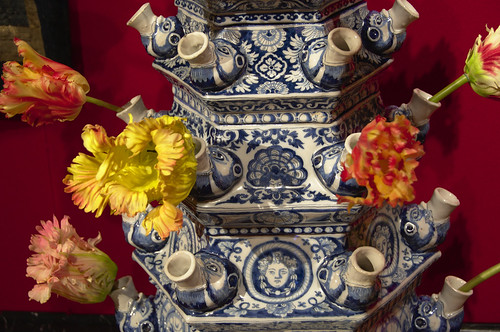 The Hanovers continued into the next room – more pictures of rigidly laid out gardens, where it almost seemed like the plants were an irrelevant extra. I confess to spending rather more time looking at the sunflower clock in the middle of the room, which was surrounded by a large number of rather fine porcelain flowers. 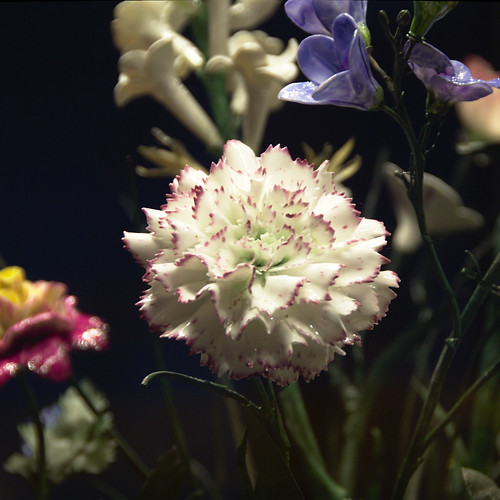 Gardens gradually became more informal, and the paintings also change to suit this new perspective – eye level and intimate views rather than overhead or otherwise formal points of view. By the Victorian era a garden was seen as a place of family relaxation. This was also the period when the culture of Royal Garden Parties started, and so the Royal Collection has paintings of those as well as of Victoria and her family enjoying their garden. 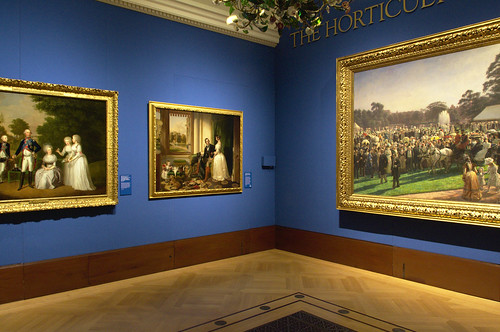 For me the exhibition gradually tailed off – the last bit was pictures of floral borders or baskets of flowers. Some of which were painted by members of the Royal Family, I think. But not nearly as interesting to me as the first couple of rooms had been.