Saturday was another bright & sunny day, so we headed off to Thetford Forest to try & find some more geocaches. We sort of misjudged the times, we’d originally planned to have lunch at home but then realised it would take longer to drive there than we’d thought so left earlier with a plan of getting lunch somewhere near Thetford. Which was successful, but perhaps taking a picnic lunch and leaving even earlier would’ve meant we could do the whole walk we’d planned. Still, it was a nice lunch at a pub seemingly attached to a Premier Inn in Thetford. 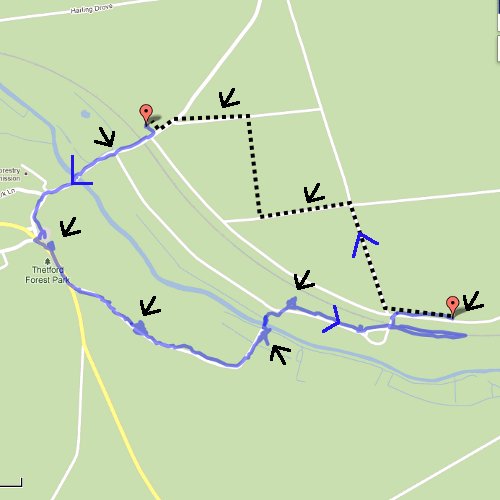 We parked in Santon Downham with the idea that we’d do the circular walk that took in the 11 caches in the Santon Downham set (“Santon Circular 1” etc) and 3 Church Micro caches – a 4.5 mile walk with 14 caches, which seemed like it would work out. In the end though we did about half of the walk, including looking for caches 1, 2, 3, 9, 10 & 11 of the circular set and 2 of the church ones (“Church Micro 1486 – Santon Downham” and “Church Micro 1485 – All Saints Santon”). This truncation was because we spent so long looking for numbers 1 & 2 in the circular walk (and failing to find them 🙁 ) that at about 5pm we decided to cut back towards the car rather than head even further away. It was still half 6 by the time we got there tho! The bit I could record on My Tracks (my battery started to run out part way round) was 3.8 miles so I suspect we still did about 4.5 miles what with the faffing about and the completely wrong turn we took at one point as well.

It felt like a disappointing day, but actually we found 6 of the 8 we looked for. The problem was that we started off by not searching for one because there were too many people there (that was actually number 11 and we went back and found that at the very end), then of the next 3 we only found 1 despite spending over an hour looking between the other two. The guy who’d put these caches down was very very good at hiding them – perhaps too good for us. But having said that, we did find all the next ones we looked for – hidden in the ends of sticks or little painted magnetic button sized ones. Well camoflaged. I think we may need to return with reinforcements sometime!

The walk was good, too, although I was a bit cold having misjudged the temperature of the sunny looking day. And I got a few pics 🙂