At the weekend we took advantage of the nice weather and headed off to a village near Aldeburgh to do a longish circular walk with several geocaches on it. That wasn’t actually our next geocaching trip, we had gone out one evening during the week to look for (and fail to find again) the one in Alexandra Park and also the puzzle one near the Dove (“Speed dating at the Dove” which we found 🙂 And so had a celebratory pint at the pub, coz it’d be rude not to really 😉

On Saturday we started off by driving to Aldeburgh and buying ourselves some fish & chips to eat by the sea – Aldeburgh has a very good chippy that’s always very busy, even on a Saturday in September. There’s only one geocache in Aldeburgh itself, “Church Micro 1071 St Peter and Paul Aldeburgh”, so we walked up and got that before heading off to Sudbourne which is a small village on the other side of the river Alde. The walk itself was in the marshes to the east of the village, starting at a farm and heading out towards the river. 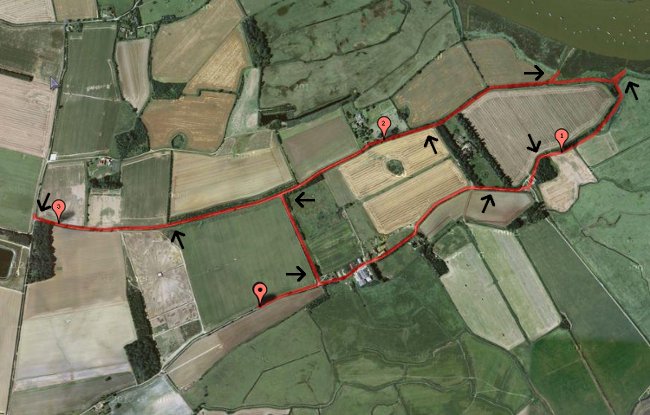 I used gmaps-pedometer to map out the route above, and it tells me it was just short of 4 miles (3.98) so given I guessed at precisely where we parked the car then 4 miles is probably right enough 🙂 We found a big enough layby to park the car that wasn’t the entrance to a field and still had space for other cars to use it as a passing place, then set off on foot. Started at the marker with the central dot, then the mile markers show you which way round the route we went – after picking up the cache just past the 3 mile point we doubled back on ourselves to get to the car. The nine caches were all part of a route called “Sudbourne Marsh 1” etc, and so were all put down by the same person. Who had a knack for hidden but still findable locations – some very clever places which had us searching just long enough to feel a sense of satisfaction when we figured it out 🙂

And I’m convinced this person works in a lab – the tubes used to hold the logs were all fairly recognisable. There was an eppendorf, there were several universals (with blue lids, I’m used to universals having white lids, guess it must be a different brand), and a tube I feel like I ought to recognise but didn’t (Corning branded, bit bigger than a cryovial, something’s niggling at the back of my head but I can’t put my finger on it). I guess my noticing that just goes to show you can take the woman out of the lab, but getting the lab out of the woman is more difficult 😉

It was a good walk, in a really quiet area. We saw a very small handful of other people near the start and end when we were on the roads, but otherwise no-one. Which meant there was a lot of wildlife, including dozens of dragonflies. And quite a lot of startled pheasants (I think they were pheasants anyway). As you can tell, I took the camera out with me. I’d put the longer lens on it (55-200) before we got out of the car and whilst I lugged the other one around with me in the bag I didn’t want to faff about changing it. I did think at a few times that maybe I should’ve done so, but actually both closeups of insects and the landscapes came out OK (or enough of them did), so that’s OK 🙂

Due to the way the land is – i.e. flat – there were banks built up near the river, to keep the farmland from flooding. That caused an entertaining illusion that there were land boats sailing past the houses in the distance. Well, it kept us amused for quite a while anyway 😉