The last part of the Mesopotamia chapter in this book covers the Third Dynasty of Ur, which was a Sumerian empire that arose a short time after the fall of the Akkadian Empire. The book doesn’t give dates for the empire – having looked at the wikipedia page I think that’s because there’s a high degree of uncertainty about when the dates were. Two different possibilities are 2112-2004 BCE or 2055-1940 BCE.

The City of Ur

The Third Dynasty of Ur rose to prominence in Mesopotamia a little while after the Akkadian Empire fell. In between the region was dominated by the Gutians, who were a mountain people and we know little about them. The ruler of Uruk eventually raised an army to drive out the Gutians, but it was Ur-Nammu from the city of Ur who founded a new empire. It’s not clear how Ur-Nammu actually came to power – there’s evidence he might’ve been a governor under the king of Uruk, or perhaps a military leader. And then he either inherited from or lead a coup against the king of Uruk and founded the only Sumerian Empire in Mesopotamia’s history. The empire (often referred to as Ur III) reached as far as Syria and Elam and was divided into two parts. The core of the empire was under the king’s direct rule, and the peripheral territories were independently ruled but economically controlled by the empire (i.e. paying tribute).

When Ur-Nammu died (perhaps in battle) after a reign of 17 years he was succeeded by his son Shulgi, who reigned for 48 years. One of these two rulers wrote a code of laws that still survives in fragmentary form, and is the first we know to’ve existed. Traditionally it’s ascribed to Ur-Nammu, but the book suggests that Shulgi is more plausible given his longer reign (over an empire that already existed rather than needing to be conquered). Shulgi also reorganised the administration of the empire – under his rule the city state rulers became governors with no military power, and he stationed garrisons in particularly troublesome regions. He instituted a practice of using an army of foreign mercenaries to control the outlying territories. He was deified during his lifetime, although most of his achievements as listed in the book seem prosaic rather than godly! These included standardising tax collection, developing state archives and a state army.

Shulgi was succeeded by his son Amar-Sin, who fought many wars against the Amorites and the Hurrians. He only reigned for 10 years before dying of natural causes and being succeeded by his brother Shu-Sin. The Amorites continued to fight against the Ur III empire, and pushed them back to their heartlands. Shu-Sin actually constructed a wall between the two rivers to try and hold back the Amorites. The book doesn’t say if this worked or not … After Shu-Sin died (after a decade on the throne) he was succeeded by his son Ibbi-Sin who was to be the last of the kings of Ur III. He built walls too, round cities rather than between rivers however. Despite a fairly long reign (perhaps 20 years) he wasn’t a strong king and the empire began to crumble almost immediately.

At its height the empire of the Ur III dynasty was a sophisticated and prosperous society. Taxes were collected across the empire on crops, livestock, labour and land. Any surpluses (I’m unclear if the book meant from the taxation or more generally) were redistributed fairly – not just to the temple bureaucracies but also to the poor. How much the common people actually benefited from the prosperity of the empire isn’t entirely clear, nor is their precise place in society. An older theory is that they were pretty much just indentured servants, but more recent analysis is that it’s more complicated. In theory it should be possible to find out a lot about the Ur III economy as thousands of texts detailing commercial transactions such as loans, leases of land and slave purchases etc have been found from this period. But the book says that no-one has done a systematic analysis of them in order to gain a complete picture (reading between the lines it sounds like the author of this particular section doesn’t agree with what analysis has been done). One thing these texts demonstrate at even a cursory level of analysis is that despite this being a Sumerian Empire, Akkadian is the language of administration. The book says that Sumerian was still the language of literature and every literate citizen had to learn it, but Akkadian was the language that people actually used for their day to day lives.

Why did the Ur III empire fall? The book says that it might better to cast this as “how did it ever succeed in the first place?”, but sadly doesn’t answer that question but goes on to consider why it fell. The suggestion is that it was a perfect storm of adverse conditions including climate change, attacks from nomadic groups from outside the empire (for instance the Amorites) and urban restlessness, combined with a king whose administrative & leadership weren’t up to the (admittedly difficult) job. Despite the broad brush strokes being unclear the details of the last king’s downfall are quite well known – royal correspondence, poetry and an administrative archive from the period have all survived. Ibbi-Sin had been persuaded to appoint Ishbi-Erra as governor of some of the cities of the empire whilst Ibbi-Sin was away fighting the Elamites. Ishbi-Erra began to assume royal privileges and he eventually proclaimed himself ruler over all of southern Mesopotamia including Ur itself where Ibbi-Sin still ruled. The Ur III empire took another 14 or so years to properly fizzle out, finished off by a famine. There’s surviving poetry recording the end of the empire that is similar to the later Book of Lamentations in the bible.

As well as this historical trot through the rise & fall of Ur III this section of the book also includes a couple of sections on the arts & architecture of this period. The first of these is about ziggurats which were the longest lasting temple designs in the Middle East: the earliest known date to at least the 4th Millennium BCE and they were still being built in the 6th Century BCE. They are monumental structures composed of two to seven tiers of platforms rising high into the sky. Access was via ramps, and at the topmost level there was an altar for making burnt offerings (or alternatively for cooking meals for the gods). As with Egyptian temples (and in contrast to Christian churches) these were not places for public worship, instead they were a place for the god to live. The platforms emphasised the separation from humanity on the ground and the gods in the sky, and only priests and rulers were permitted to go up to the top. 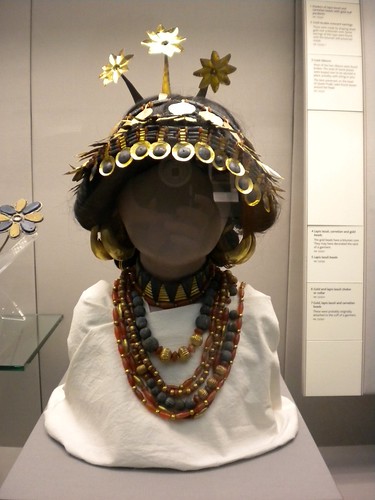 The last double page spread of the chapter looks at the precious metal working and jewellery of Mesopotamia from it’s earliest known examples through to the end of the Ur III empire (I think, the dating isn’t clear in the text). Gold and silver aren’t found in Mesopotamia, but precious metal working still starts early in the 4th Millennium BCE with imported raw materials. The preferred designs were natural and geometric motifs, like leaves or spirals. Jewellery was made from gold or silver leaf and set with semi-precious stones. It was worn by both men & women, and possibly children too, as well as by statues of the gods. Jewellery might confer protection on the wearer – for instance lapis lazuli items meant you were protected by the sky god Anu. The picture above shows a replica of a headdress found by Leonard Woolley in the 1920s in the royal tombs at Ur (it’s in the British Museum now). These tombs are the source of a lot of our knowledge of Sumerian jewellery, in particular the tomb of Queen Pu’abi (and all her (young, healthy) attendants who were all interred at the same time).

The fall of the Ur III empire is considered the dividing line between the Early Bronze Age and the Middle Bronze Age, and the next chapter on the book is about the power struggles between the various kingdoms of that period.