A couple of days after we saw Warpaint play in Norwich (post) we went to London to see Arcade Fire play. This was quite a different scale of gig – it was in the main venue at Earls Court, which is a really quite enormous space compared to the LCR at UEA. When we arrived to join the queue just after doors opened there was a Mariachi band playing in the front door – I think we must’ve just missed them arriving in a limo. They serenaded the audience as we walked into the venue. 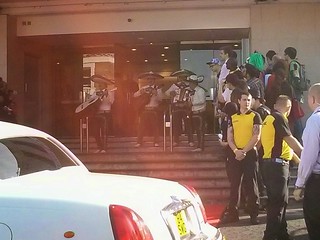 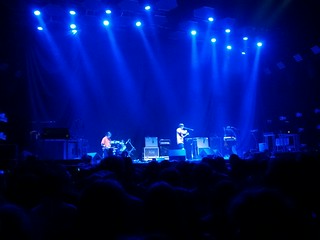 Once we were inside we headed to the merch desk for a t-shirt each, and then off into the hall to try & get a good spot. We ended up not that far back, about 10-15 people from the front. I think we could’ve pushed further forward at that point, but it would’ve involved more pushing & shoving. First up was a set from Owen Pallett and his band – he played electric violin most of the time as well as singing. I didn’t warm to his music much, it was very technically proficient but it felt rather like that was all it was if you see what I mean. After his set I popped out to the loos, so I apparently missed a piñata on stage and the start of the DJ set. At that point I was glad we hadn’t pushed further forward as for the first time ever I was worried I wouldn’t make it back through the crowd to where J was standing – I thought it was a fairly grumpy audience overall, not keen to let people through and very defensive about their personal space. 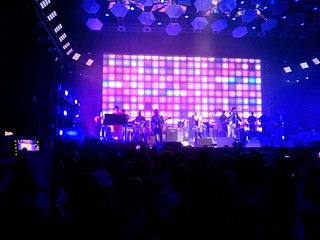 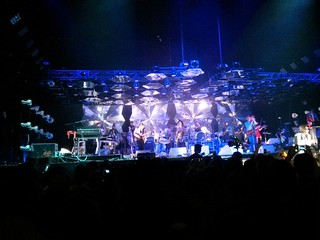 Arcade Fire were great! 🙂 There’s quite a lot of people in their touring band (I think they’re not all in the band per se) so there’s always something to watch even if the people standing in front of you block the view of bits of the stage. The band also all look like they’re enjoying themselves, one guy in particular runs about the stage playing drums and various bits of stage equipment as drums (always in time, despite the manic antics), but everyone seems to be having fun. There was a second stage in the middle that they used for bits of their show – dancers sometimes, and for one song Regine was singing from over there too. It wasn’t overused, so it didn’t feel like you had to watch two ways at once, but it made for a different dynamic for some of the songs. There was also a surprise special guest for one of the songs – Ian McCulloch from Echo & the Bunnymen, and they did a cover of The Cutter.