The thirteen books filed under A on the shelf weren’t all the fiction I’ve read over the last six months – there were also fourteen books from the library. While I was putting together the stats for the books on the shelf (post) I also looked at these other books.

The books were as follows (links go to posts): 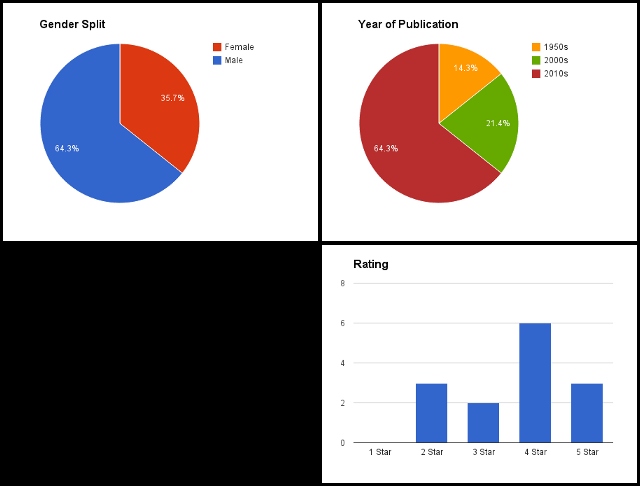 When I started thinking about looking at the stats for what I’ve been reading in posts like these I thought to myself that whilst the books filed under A might have very male-skewed authors “obviously it’ll be 50% or more women for the other books”. Er, no. Fourteen authors, 9 male … still just 36% female. Not much better than the ‘main’ author stats for the As. So that’s rather disappointing. In terms of nationality it’s still a very US dominated list, and only one author was neither UK nor US (Maurice Druon is French and his book was originally in French (I read it in translation)).

Genre-wise they skew towards fantasy and historical novels. Eight books fall into some category of fantasy, seven books are in some way historical (they overlap). Perhaps a reaction against all the early science fiction I was otherwise reading? Certainly nothing deliberate in the choice.

This selection is mostly fairly recent books, probably because I reserved most of them after reading reviews or excerpts. The outliers are the Asimov (reserved because I don’t own book 1 of the Foundation trilogy and it seemed a shame to skip it) and the Druon which was recently reviewed on tor.com because George R. R. Martin has cited it as an influence on his Song of Ice & Fire series. Both of those were published in the 50s.

The mean star rating was 3.6 as compared to 3.1 for the As, with the mode being 4 rather than 3. Again influenced by reading reviews/excerpts before reading the book because I could weed out most things that weren’t going to be to my tastes before reading them*. Not flawlessly tho! The three books that were my least favourite included one I’d read before (the Asimov), one that I read & liked an excerpt from (the Cole) and one I read a very positive review for (the Whitfield). I’d say that the Cole was probably my biggest disappointment, the type of story I thought it was going to tell is a type I particularly like so it was sad not to get it.

*Whereas the stuff on the shelf included a lot of things I bought more than 20 years ago and my tastes have changed.

Those that were my favourites were all liked for different reasons and oddly I’d only recommend them to other people with caveats. A Memory of Light was a very satisfying conclusion to a series I’ve been reading for something like half my life, but you definitely couldn’t start with that one & the series as a whole does get bogged down in the middle so I could understand not wanting to read it all. The Atkinson gets better every time I think about it, and I think it’s got something interesting to say about environment, culture & personality and how those affect your life & your sense of self (both more & less than you’d expect). But I think you’ve got to be happy reading something very non-linear to enjoy the book, and it doesn’t have a plot per se. And lastly the Wendig is a vivid & intense urban fantasy/thriller crossover … but it’s pretty gruesome in places & if you’re easily offended by swear words you’re not going to enjoy it at all.