On Sunday Hannah Pethen came to talk to us at the Essex Egyptology Group about the Harem Palace at Gurob. The first half of her talk gave us context for the site - where it is, what it is and who has excavated there before. And the second half moved on to the work that's been done there in the last decade. 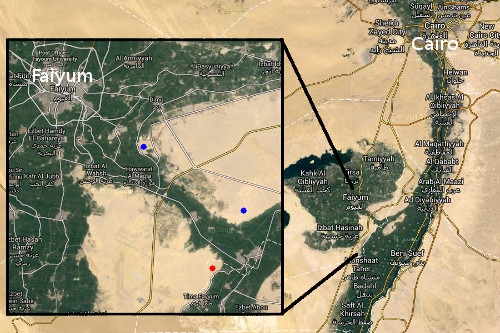 Gurob is in the Faiyum near the pyramids at Lahun and Hawara, in fact Lahun pyramid can be seen from the site across the river valley. On the screenshots above the position of Gurob is indicated by the red dot, and the blue dots show Lahun (to the north & east of Gurob) and Hawara (to the north-west). The three sites are on either side of a spur of river that diverges from the main Nile further to the south and feeds into Lake Qahrun. Pethen said it's possible that the course of this spur of the river was engineered by the Middle Kingdom Egyptians in order to irrigate the land on the way to the lake. Gurob includes a royal harem palace so it must've been in an area where the Pharaoh wanted a powerbase and Pethen suggested that this location would allow the state to control access to the fertile Faiyum area.

In Ancient Egypt the harem was not just the place where wives and children of the Pharaoh lived, it also had governmental and economic functions. Various senior state officials would describe themselves as being "of the Harem" and it was also the place where the finest quality linen in the country was made. There are several different words that mean the royal harem in Egyptian, all with different nuances or circumstances they're used in. ipt nswt means the royal private appartments. ḫnr means the harem and its inhabitants, but this is often used in the sense that I discussed above to mean the governmental function of the harem. pr ḫnty refers to the harem estates or institution. kꜣp is the school or nursery in the palace - tomb biographies might refer to someone as a "child of the kꜣp" meaning that they were educated with the princes and grew up in the harem.

As well as the words and a few surviving images that may be of the harem there is also textual evidence for the existence of harems in Ancient Egypt. This includes evidence of a series of harem conspiracies. Pethen talked about three examples, each from a different era of Egyptian history. There is an Old Kingdom inscription about an official looking into a harem consipiracy against Pepi I. In the Middle Kingdom there was a successful conspiracy against Amenemhat I who was attacked by the guards of the harem - this is documented in fiction written after the fact, but as Pethen pointed out historical fiction often takes its starting point from an event which actually happened. Her last example was the death of Ramesses III which was due to a partially successful coup - the perpetrators succeeded in killing Ramesses III but failed to gain the throne afterwards, and documents recording their trial and sentence survive.

Having set the scene in a general sense Pethen moved on to tell us a bit more about the site at Gurob. It was first excavated by Petrie in 1888 and then by his assistant Hughes-Hughes in 1889. This wasn't a particularly in depth investigation as it was done alongside Lahun and Hawara, About 10 years later Griffith published a series of New Kingdom papyri that were found at the site. Once the archaeologists started showing an interest in the site so did plunderers and looters, which did lead to the discovery of some tombs although obviously anything valuable had been removed. However several figurines of royal women were found by Émile Chassinat.

In 1904 Leonard Loat excavated at the site, and discovered the temple which is dedicated to Tutmosis III - he may've been worshipped here as the founder of the site in a similar fashion to the worship of Amenhotep I and Amose-Nefertari at Deir el Medina. This excavation uncovered several stela set up by men who described themselves as harem officials. The following year Ludwig Borchardt excavated at the site and identified the Harem Palace itself, and found a head of Queen Tiye which is now in the Neues Museum in Berlin. The last of the excavations before the modern one was by Engelbach and Brunton in 1920. They produced a map of the site which is still useful to archaeologists today - Pethen's slides often contained information from this map. As well as the various structures that had been discovered they also recorded the tombs in the area, and indications of where pottery shards were. 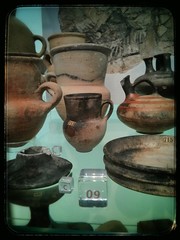 A "Burnt Group" from Gurob now in Manchester Museum

Next Pethen discussed the evidence which indicates that Gurob was the site of a harem palace. As already mentioned above there are stela in the temple at Gurob which were put up by harem officials, which is suggestive that there was a harem there. There are also references in the Gurob papyri to royal women and their personal possessions (such as clothing), and evidence of royal women buried at the site (like the statuettes discovered by Chassinat). Tutmosis III probably founded the site - perhaps to house some of his several wives, but also to have a royal presence in the region which was economically important but with a reputation for unrest. Pethen also discussed the evidence for specific foreign wives of three Pharaohs (Tutmosis III, Amenhotep III and Ramesses II), as well as more general evidence for foreigners - which included the "burnt groups" of personal possessions (see photo above) found at Gurob by Petrie. These have recently been re-analysed and they are similar in nature to Hititte rituals.

The Gurob Harem Palace was in use for around 500 years, from Tutmosis III's time through the New Kingdom. After that the site was not completely abandoned. There is strong evidence for it being a port in Ptolemaic times (and quite probably was a port during New Kingdom times as well). And in modern times it was a military base up until about 20 years ago - which has left a lot of visible evidence on the site (which you can see on the most detailed Google maps satellite imagery as pockmarks where the bunkers were).

For the last part of her talk Pethen told us about the modern excavation at the site. It sounded like it is quite an odd site to work at - it's been so extensively excavated around the turn of the 20th Century that most of the big exciting things are already dug up. What the current team are doing is filling in the details and making it a more rounded and thorough picture. For the first few years of the project they weren't allowed to excavate, so instead they concentrated on systematic surveys of the areas of interest for pottery fragments and other interesting surface objects. This work has allowed them to start compiling a pottery typology for the site - which is actually a relatively recent development in Egyptian archaeology, I think because so much of their dating can be done from inscriptions rather than needing pottery.

When they returned to the site in late 2011 after the revolution in Egypt there had been a lot of looting, as with many other archaeological sites in the country, so they began that season by mapping the illegal digging. In the spirit of making the best of it they documented and photographed a lot of these digs as they exposed features that they otherwise wouldn't've seen. In the spoil heaps the looters left behind they also found some interesting objects - like a shabti figure in one. And in another a pottery coffin (which might've been intact when the looters found it, it's sad to think it was whole so recently but now smashed). There were also some smashed remains of a wooden coffin and a linen cartonage board.

One of the areas where they've excavated is the town area to the north of the Harem Palace itself. While some of the excavations haven't found anything much they've been more lucky with others and discovered two kilns. The area surrounding these shows signs of having been used for large scale pottery production - they've found a clay cleaning area, and pot holes for some sort of shelter near the kilns. The kilns themselves were full of pottery when they were excavated - mostly 18th Dynasty to Ramesside era pottery, which is the time when Gurob was most heavily occupied. This actually suggests that the kilns weren't in use during this period, instead they were being used as a rubbish dump. So the current theory is that they were in use during the building phase of the settlement in Tutmosis III's time.

Another facet of their work on the site has been to use auger boring to look at the geological context of the site and how it's changed over time. One major change between the time when the site was occupied and now is that the river used to run right alongside the site. These days it's quite a bit further east. Using this information they think they've identified the likely site of harbour that was in use during the 18th Dynasty (marked on Engelbach & Brunton's map as a fort). They've also found a mudbrick wall under the silt layer along the edge of where they think the river ran during the 18th Dynasty.

This was an interesting talk about a site I thought I hadn't heard of before (although clearly I had seen some items from there as I'd photographed them!). It's cool to see how modern archaeology is still capable of finding new information even on a site that's been as extensively excavated as Gurob.