I've reached the end of the first letter of the alphabet in my great re-read of all the fiction on my shelves, so I thought this would be a good point for a retrospective on what I've read so far. I'm fond of stats & graphs, so that's where we'll start :)

The books are as follows (links go to my posts): 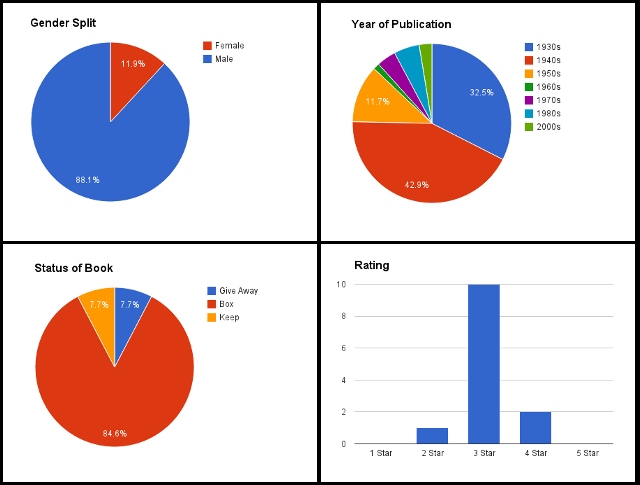 So out of the 13 books I read most were firmly in the "OK" territory (I've not put ratings in my blog posts, but I do put a star rating on them on my librarything). The outliers were the Armstrong book at 2 stars (which I think of as "meh"), and the Asher & Asimov's "Nemesis" at 4 stars ("cool"). And that corresponds pretty much to what's staying on the shelf and what's going - although "Nemesis" is going into a box to keep it with the rest of the Asimovs.

For the gender ratio & publication stats I've added in the data for the individual short stories. In terms of gender split - it's pretty poor. Even if I just count the three main authors there's only one woman & she's the one who wrote the book that's leaving the house. When you add in the short stories the percentage gets worse, which can probably be explained by looking at the publication date breakdown. The anthologies are all old stuff - 1930s & 1940s fiction for the multi-author ones, 40s & 50s for the Asimov ones.

I've not done a graph for genre breakdown, genre boundaries & definitions are always fuzzy and I figured it makes more sense to talk about it than diagram it. Given this shelf was dominated by Asimov & Asimov-related stuff it's dominated by science fiction. I've also got the bulk of the 1930s & 1940s stuff categorised under "science fiction" as an umbrella term - some of it would probably be better put as fantasy and some of it would be fantasy if published now but was still possibly science fiction back then (like the shrinking men stories). And that's why it's easier to talk about than to diagram! There's only two non-Asimov related books - the Armstrong is urban fantasy and the Asher is science fiction (sub-category space opera). I think the main reason I was "meh" about the Armstrong is that I went through a phase of reading a lot of UF a few years ago and got tired of the clichés, and there's nothing about "Bitten" that makes it rise above that to my eyes.

I'd wanted to see how the authors I've read here break down by ethnic identity, sexuality or other cultural groupings (like religion), but that sort of info appears to be hard to figure out. From the ISFDB and links from there (mostly wikipedia) I could normally figure out nationality (and that's where I double checked gender) - but other info was notably lacking. I guess I could assume "white & straight unless otherwise specified" as that's often the way things work out in places like wikipedia but that doesn't seem right, so I'll skip any conclusions here. In terms of nationality it was a predominantly US list, with a few Canadians & a few Brits - 33 of the 42 authors listed born in the US and while some moved away others moved in, the percentage of around 80% US is probably right. I've not done a graph because again it gets fuzzy - for instance does a British born man who moves to the US in childhood & stays there count as US or UK or both? Does it depend when he moves?

Something interesting I noticed while researching this - two authors that are US-born move to Canada in the 60s because of their politics. Chan Davis moved in the early 60s after he'd spent time in jail in the US because he was a member of the Communist Party of America. Judith Merril was first a Marxist then a Trotskyist (& also a Zionist in her youth), she moved in the late 60s in the Vietnam War era. She's also referred to as a "genderbender" on the webpage for her but I'm not clear on how the phrase is being used there.

That's the stats, what about the books? For Armstrong & Asher there's only a single book apiece so I've nothing to add to the original posts. The various anthologies are interesting to me mostly as something historical - some of the individual stories were good, but the world & audience they were written for is almost as alien to me as the worlds they were written about. Particularly noticeable for the 30s stories, which also included a sub-genre that seems to've vanished - the "Lone Male Scientist & his Invention have Adventures" ones, think of H. G. Well's "The Time Machine" as the archetype for this.

I've got a broader sweep for Asimov, but it's an oddly skewed one. What I bought in the late 80s were books my mother didn't already own - why buy things that were already in the house, after all? Of course now I don't have easy access to those but I still don't own them (with the exception of the two parts of the Foundation Trilogy that J bought back in the late 80s or early 90s). So I've only read 4 of Asimov's novels here (plus a fifth as a library book). I much prefer his novels to his short stories, and Foundation (post) was the weakest of the novels for me and also the most obviously a fix-up of previous short stories. This is down to the lack of characterisation - it feels to me that Asimov didn't bother making his characters into people in his short stories, but in a novel there was enough space for them to grow into more distinctive individuals. I preferred his (very few) female characters, I think he did a better job making them memorably distinct rather than names slapped on a stereotype. Having re-read the stories in Nightfall One I also wish he'd written more aliens in his career - I remember enjoying the alien section of The Gods Themselves years ago as well (another book Mum has that I don't). My guess would be that in the case of both aliens & women he had put them in the story for a purpose & needed to take some time over thinking about their role, but men were his default & he was lazier about it. I.e. that he felt he needed an answer to the question of "why a woman?" but men were just the furniture for the story idea he was trying to show you.

For me, Asimov isn't ageing well. The stuff I liked so much in my teens seems pedestrian now - I've read better books since, and even the one of his I liked best here didn't rise up as high as the "awesome" category. Which seems a very odd thing to say about a man who's held up as one of the Great Science Fiction Authors, but for me you need more than a good idea to make a good book you need some properly fleshed out characters & something more to the story. Sacrilege to some, I'm sure, but I wouldn't recommend the Foundation trilogy to anyone unless they were interested in the history of the genre.

I'll have another one of these round-up posts soon, about the other books I read while reading the 'A's. We'll see how the stats on that balance up.