Epic 2 is the first of the Realms Beyond Epics that I've participated in - these are longer games than the adventures, run at epic speed which has more turns than a normal speed game of Civ4. Even though the difficulty level is a bit beyond my comfort zone (Monarch, again) the scenario and scoring system looked interesting, so I thought I'd give it a try :) 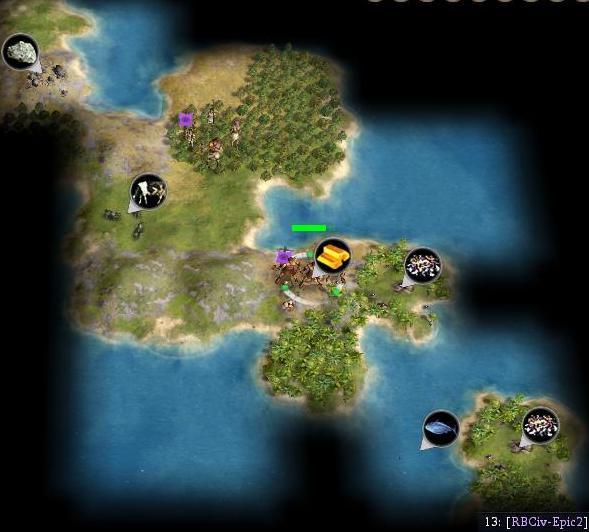 5 pts - EACH source of Gems you control at game's end. (If you "pop another one" it counts too!)

5 pts - EACH source of Gems you control in 1500AD. (Must be within your borders, mined, and connected.)

3 pts - EACH source of Gold you control at game's end

2 pts - EACH source of Silver you control at game's end

10 pts - Build the Oracle (remember, you must not found any religions!) AND use it to discover Mathematics or Currency!

10 pts - If you complete the game without ever capturing or razing any (non-Barbarian) cities.

5 pts - If you capture or raze cities solely for the purpose of gaining control over Gems, Gold or Silver supplies.

5 pts - For every Gems resource, build a Laboratory in the closest city on the same island. (Must have a Lab at every applicable site to score the five points).

5 pts - Fastest Diplomatic Victory - only counts if your population is below 40% at time of winning vote.

1 pts - Each island (of ANY size) under your complete cultural control at game's end.

2 pts - For EACH unit of Future Tech you research (maximum of 5).

5 pts - First player to control all Gems sources in the world AND also have all six rival civs as Customers.

3 pts - First player to control all Gold sources in the world.

2 pts - First player to control all Silver sources in the world.